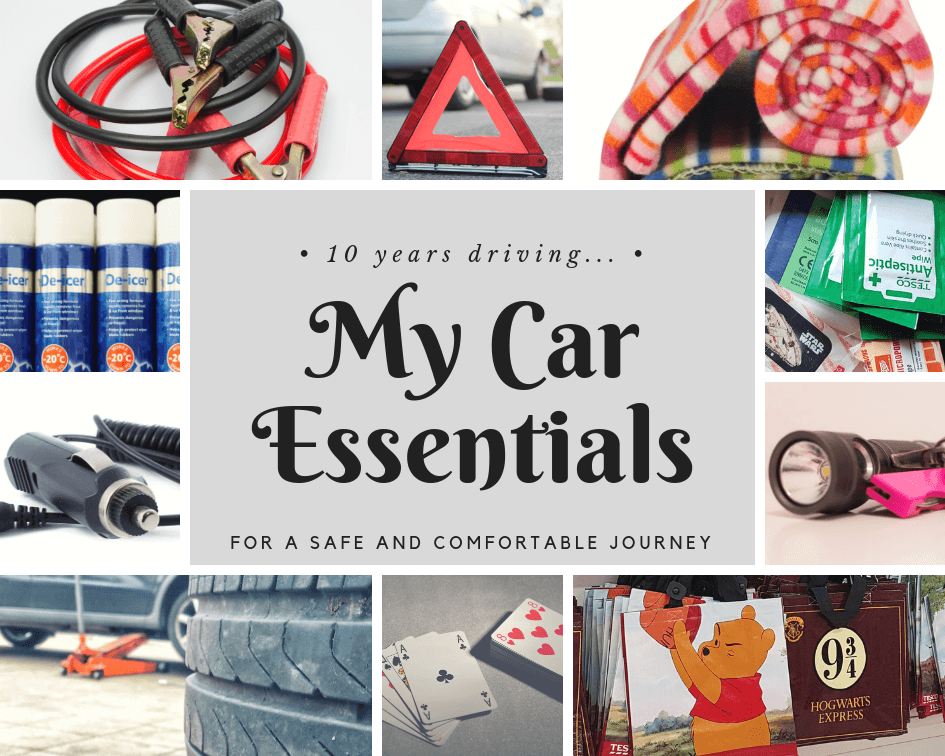 Today marks 10 years since I passed my practical driving test(!), I can’t believe it’s been that long really.  A decade of driving. I thought I’d celebrate this milestone by talking about my car history and some car essentials.

My first car was a red Renault 5 named Noddy after the children’s carton character, and also because the number plate could spell out the word “NOD”.

Noddy was my mum’s old car and unfortunately the engine blew before I had a chance to learn to drive in it. I did have a go at changing the gears while my mum was driving though.

Sadly I couldn’t find any photos of Noddy to share with you. 🙁

The first car I drove (along with my driving instructors Vauxhall Corsa) was a red Ford Fiesta named “Anemone”. Why? The letters “N” and “MNY” were in the licence plate which sounded like the word anemone. Genius, eh?

The car lasted me well for a year and a half but at it’s last MOT would have cost more to keep running than it was worth so it was time to sell. When I heard about the government’s scrappage scheme I decided to part exchange Anemone for a Suzuki Sz3 which I owned for six years.

I called my Suzuki Yanto after Ianto Jones of the Doctor Who spinoff show Torchwood. A memoriam as the character had recently died on the show. Don’t ask me why I used a ‘Y’ instead of an ‘I’ though. 🤷

I currently drive a white Suzuki Ignis, named Iggy which I purchased in the middle of August. I’ve enjoyed getting used to driving Iggy and all the new gadgets from reserving cameras to button operated wing mirrors and Bluetooth connectivity. I love this car!

Now you have a little insight into my car history, I’m going to share with you the items I always keep in my car. Some are for emergencies and some are to make long road trips more enjoyable.

… So without further ado.

Emergency Car Kit
Broken down and stuck somewhere? Need to clear ice from your windscreen? Want to warn other drivers of an accident ahead?  This is where an emergency car kit comes in handy. Mine is simply a bag in the boot of my car where I keep my jump leads, hazard warning triangle, torch, tyre pressure gauge, spray de-icer, ready mixed washer fluid, ice scraper and a mini shovel.

Honestly I’ve used all of these items at some point in my driving life – except the hazard warning triangle – thankfully!

This could go in your emergency car kit but I prefer to keep mine in the glove box where it’s more accessible. I wrote a detailed post on first aid kit essentials here but you can see an example of what to include in my photo below.

Blanket
Not just for keeping warm if you find yourself broken down in the Winter months but also great for a picnic or a trip to the beach. Mine is from Mountain Warehouse (similar) and is waterproof on one side and fleece on the other.

Grocery bags
With the introduction of carrier bag charges in shops I make sure I keep a few of these handy for when I got shopping. I can’t tell you the amount of times I’ve walked out the house without one and had to pay for grocery bags as well as my groceries.

Umbrella
For the unpredictable British weather and my forgetfulness in picking one up when I leave the house. 😅

Travel games
These are great if you’re away camping and after some evening entertainment. Or to pass the time should you break down. I have a mini chess set and a pack of playing cards stored in my glove box but I’m looking to add Uno as well.

Phone charger
I use my phone for multiple things so keep it charged up is essential. My phone acts as a sat nav, I play music through my car’s Bluetooth, as well as using it for emergencies.

Spare Tyre and a Jack
Most cars come with a spare tyre and jack but in case yours doesn’t it’s a good idea to keep these in the boot of your car in case you get a puncture. Or if your tyre tread is dangerously low.

What essentials do you keep in your car? Is there anything I’ve forgotten? Let me know in the comments. 😊

P.S. Please tell me I’m not the only one who names their vehicles?!