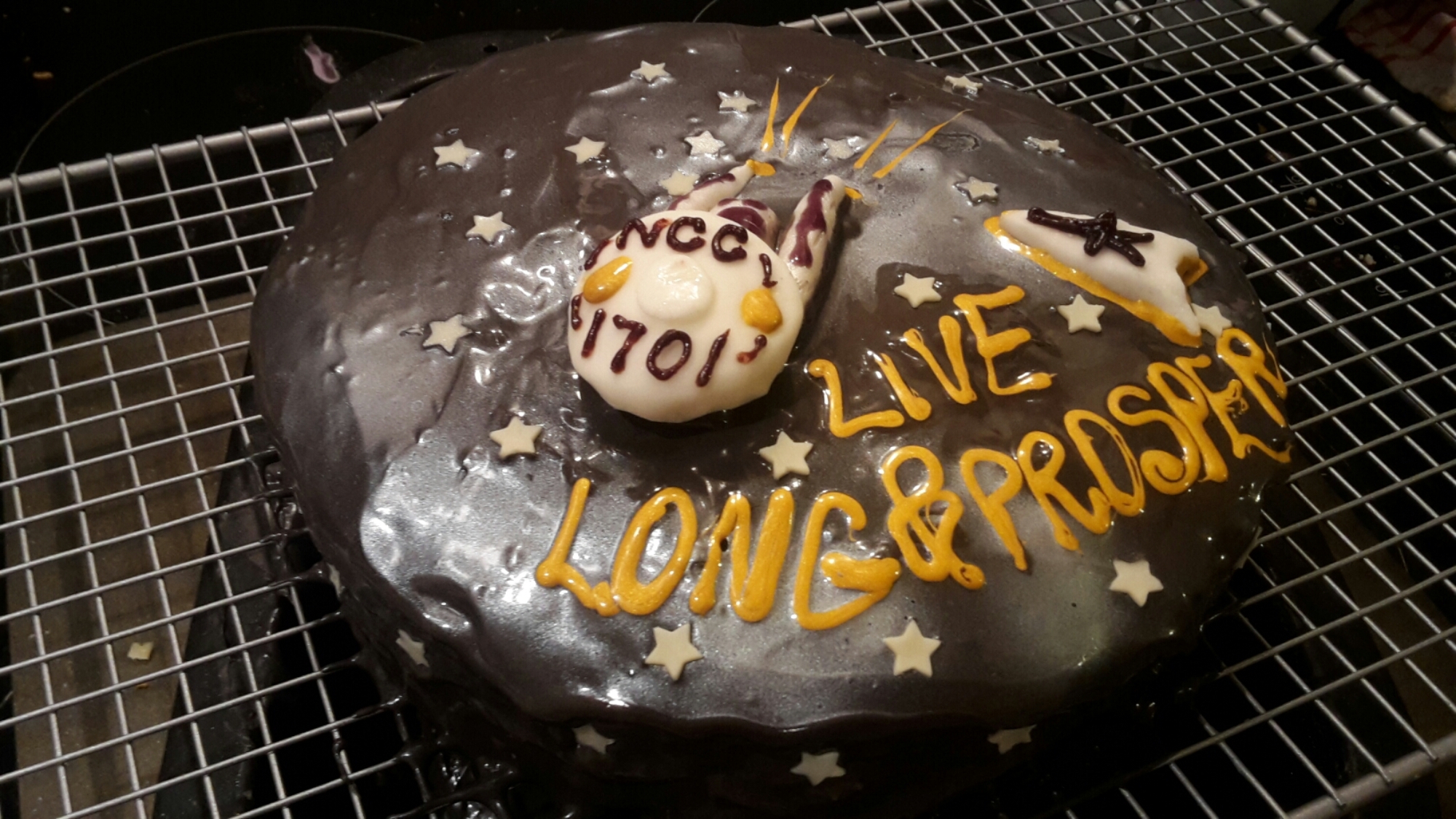 My dad’s birthday was on Tuesday, but as it was a ‘school night’ we decided to celebrate Saturday evening instead with a delicious Indian takeaway and movie night. His choice. We also went to the <a href=”https://chimmyville.co.uk/crudwell-strawberry-fayre/”>Crudwell Strawberry Fayre</a> during the day.

Unfortunately my sister was working and couldn’t make it so we decided to do presents and cake Tuesday evening so we could all be there. We also had another takeaway (lol).

My dad is a ‘closet Star Trek fan’ (his words) so I decided to have a go at baking him a Star Trek themed birthday cake.

After some time spent on Pinterest looking for ideas I decided on a chocolate swirl cake with midnight blue frosting (which didn’t pan out! – See frosting method for full details, but lets just say it proved very problematic!) and decorated with white chocolate stars, the Star Trek insignia and the Star Trek enterprise  (both of which I made from fondant).

Combine together the flour, baking powder and salt. Set aside.

Add the butter and beat until creamy and smooth.

Add the granulated sugar and continue beating until light and fluffy.

Add the eggs one at a time, beating well after each addition. Beat in the vanilla and water until smooth and creamy.

Remove 8 tbsp of the mixture and place in a smaller bowl and set aside.

Pour the cake batter into your cake pan.

Combine the coca powder with the mixture you set aside and stir well. Then spoon this into the mixture in the tin and using a rounded knife, gently swirl through.

Note: You can also swirl it in the bowl itself but you’ll also need to re-swirl once it’s in the cake pan.

Bake until the cake is lightly golden and slightly firm, for about 30-40 minutes.
Leave to cool then transfer to a wire rack.

Cream the butter until creamy.

Add the confectioners (powdered) sugar into the mixing bowl and stir well.

Frost the cake (I used a pallet knife) and smooth over it. I used two coats.

You will notice in the photos that the frosting is not midnight blue, although that was my intention after two attempts and following a bunch of tutorials on-line I ended up with maroon (!), brown (!), a silvery blue and a blue/grey. I settled on the blue/grey.

If I do a space or night sky cake in the future I’ll probably buy ready mixed midnight blue frosting.

Add the chocolate stars spaced over on the cake and adding any lettering with white chocolate or writing pens (I used metallic gold and the words ‘Live long and prosper’).

The white chocolate stars on my cake make up the constellations Orient’s Belt and the Little Dipper, which Ryan put on the cake. 🙂 There are also stars dotted around the edge of the cake and near the lettering and Star Trek insignia.

To make the Star Trek insignia, I used a star shaped cookie cutter with rolling icing and cut off two of the points.Then used a black edible writing pen for the star burst in the centre.

Dad’s favourite Star Trek starship is the NCC-1701 enterprise from the original series, which compared to others is a relatively simple design. It has little to no markings on the upper part of the ship other than the name plates.

To make the enterprise I used white rolling icing and edible silver spray. For the lettering I used a black edible pen and a gold metallic edible pen for the ‘lights’ on the top of the back of the ship (see photo). Then a little black for the other details.

It’s not perfect but I am relatively new to making my own fondant decorations.

I also used my silver spray on the cake itself.

Overall I’m happy with the cake and my dad loved it, which is the main thing! 🙂 However, there are some things I’d do differently if I attempted this or a night sky cake again.