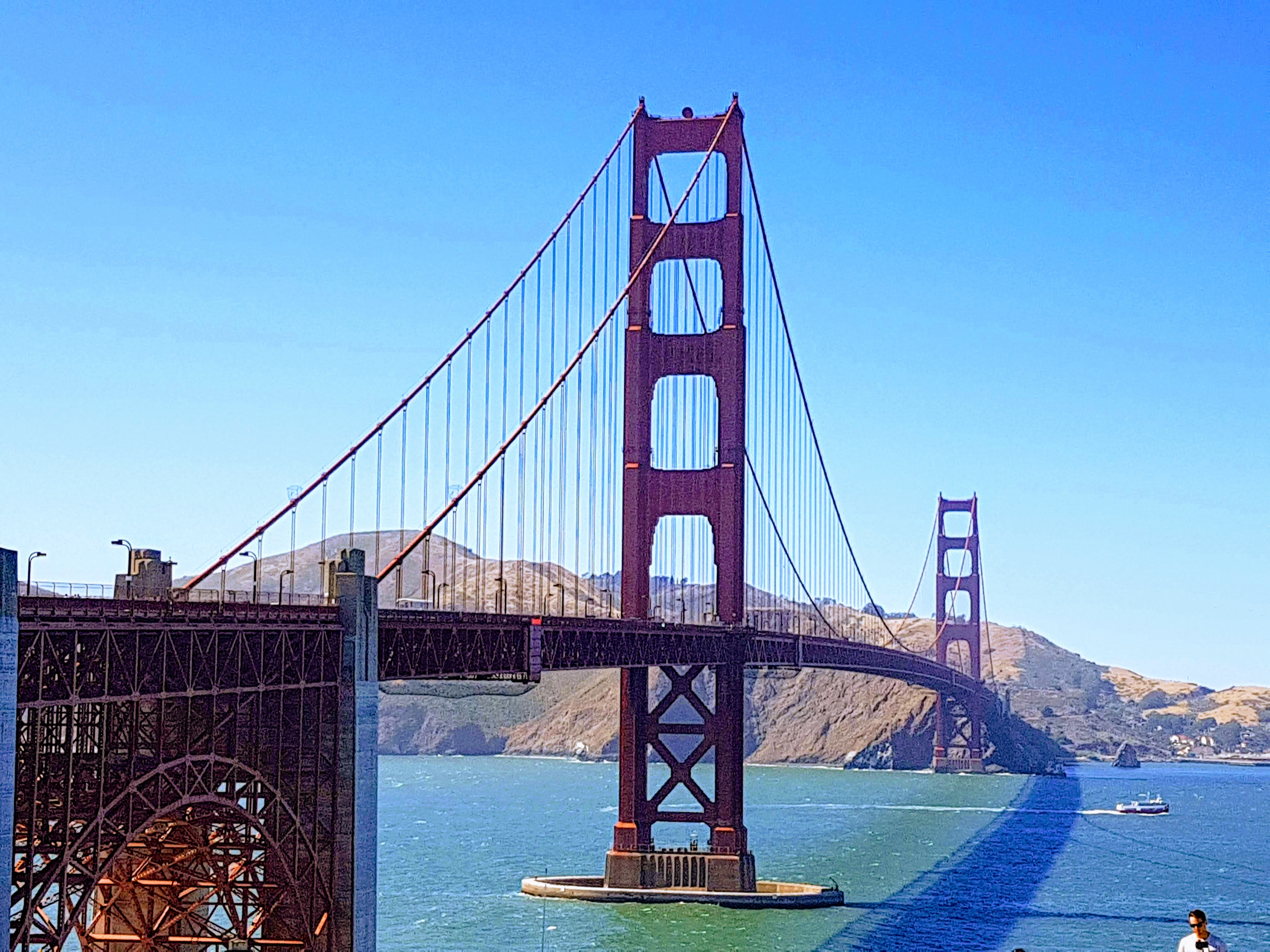 This is part 2 of a series of blog posts about my trip to California with a few friends. If you missed part one, you can read it here.

We got up early and made our way into San Francisco for our Alcatraz tour having prebooked our tickets online weeks before. If you’re thinking of going I’d highly recommend booking in advance as it gets very busy!

As we had some time to kill before boarding the ferry we stopped off at the San Francisco Hard Rock Cafe; I was, disappointed. The vegan and gluten free options were very limited and I was able to have a salad or a cheese less burger – as I was starving and we had a long day ahead of us, I went for the burger. 🍔 Bellies full we headed to Pier 33 and boarded our ferry.

The ferry trip over was fairly smooth and offered stunning views of San Francisco bay.

Alcatraz island was picturesque with many gardens dotted throughout the island. The penitentiary itself was haunting to be in and we were given a free headset to use as we walked around, telling us about different parts of the prison. I learnt a lot and I’m glad I took the opportunity to visit.

We started our day early and headed to Pier 39 and Fisherman’s Wharf. I was looking forward to seeing the seals lounging in the bay but was a little disappointed… apparently it’s off season for them to be in the bay – Doh. We did manage to see three and one of them was definitely a poser. 😉

Next up was the cable cars! I’d heard so many things about San Francisco’s iconic cable cars before my trip and they did not disappoint – offering a great view of city and a great way to get around. We didn’t have a destination in mind but road them up and down a couple of the lines; we purchased a day travel pass which could also be used on buses and the subway.

I had a great time riding on the cable cars and it was worth the hour wait queuing to get on one!

We couldn’t fly all the way to California without visiting Los Angeles but one day was nowhere near enough! We’d booked an early morning flight in advance as this was the quickest and cheapest option (a one hour flight for $100).

As we only had a day in the city we decided to check out Hollywood and Santa Monica – our first stop was Hollwood Blvd where we had breakfast in Dave and Buster’s and played some arcade games. If I had my way we probably would have stayed here all day as I love arcades.

The look of concentration of my face lol 😅

Dave and Buster’s was in a small shopping centre with a great view of the Hollywood sign.

Feeling stuffed, we popped across to a very large Hot Topic store – I didn’t buy anything mostly because the prices were quite steep and, apart from the Hot Topic exclusives, I could buy a lot of it elsewhere. It was still great to finally set foot in one though. 😍

After Hot Topic we walked up the Hollywood Walk of Fame, I was on a mission to find Jeff Goldblum’s star and my mission was a complete success. 😀

My friends and I call this “Gold-bluming”.

It was a very dry heat in L.A. and soon Hollywood Blvd got too hot for us to walk around so we headed off to Santa Monica where it was much cooler thanks to the sea breeze.

Walking down Santa Monica pier we bumped into a friend of ours who we met through a Queer as Folk convention in Germany, along with the lovely Thea Gill who was an actress on the show. It was a nice surprise and great to see them both again and have a catch up, and take a few group photos.

I was disappointed that I was a half an hour drive from Torrance high school (where they filmed Buffy the Vampire Slayer) but wouldn’t get to see it! We ran out of time but it gives me a great reason to come back. 😉

We popped into San Francisco city centre first thing for one last look at the bridge, which now had the traditional fog surrounding it. A nice contrast to the photos I took earlier in the week.

After marvelling at the bridge we headed to Target, another store on my US travel list. 😉 I picked up some bath bombs and a large box of Lucky Charms to take home with me. Which I haven’t actually eaten any of since coming home. lol.

Considering our hotel was on Berkeley Marina we hadn’t seen much of it so I decided to head out and walk around the area. A nice chilled afternoon before our long flight home the next morning – the views were perfect.

I loved my short visit to the US and can’t wait to go back and see more. I’m working on a US travel list that I hope to share with you all very soon.

What’s top of your US travel list? Have you been to California?