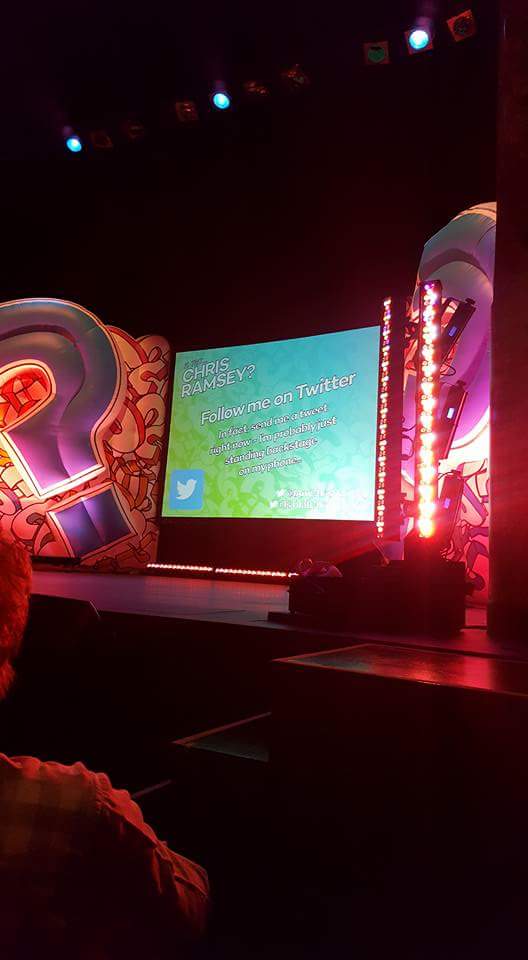 ​The Everyman Theatre is a Grade II listed building in Regent Street, Cheltenham. Home to various theatre productions, ballets, comedy shows and an annual pantomime. I’ve been coming to the pantomime with my family for as long as I can remember – it’s one of our Christmas traditions.

There are two stages in the building – the 694 seat main stage and the 60 seat Studio Theatre, although I’ve never been to a production at the latter. The theatre boasts two bars with seating and you can buy some snacks – homemade cakes, chocolate bars and, my favourite, little tubs of Marshfield brand ice cream. I always have a tub of mint chocolate chips during the interval.

We usually sit at the front of the dress circle for theatre productions and the pantomime but prefer to sit in the stalls for comedy shows. But no matter where we sit the atmosphere is perfect.

This past weekend, Ryan and I went with his brother and sister in law to see Chris Ramsey’s new comedy show. It was hysterical! We managed to get front row tickets, so we’re concerned we might get picked on during the show – we didnt! – the couple next to use did. 😉

The show was very relatable, jokes about young couples, having your first child and about your fears. He told some funny stories, including one time where he got arrested after being incorrectly I’D by staff at the hotel he was staying at and another about a strange drunk lady trying to break in to his hotel room at night (!!). Creepy.

His support act was Carl Hutchinson who was equally funny. He told us a story about an upcoming dinner party he and his wife are having with a vegetarian. Aren’t people with food intolerances or fussy eaters really difficult to cater for!? 😉 The majority of people agreed.

It was a great night and to top it off both Chris and Carl were signing and having photos with everyone after the show. It was great to meet them, both were very friendly and down to earth.

Our next comedy outing is to see Jimmy Carr at Cheltenham Town Hall at the end of May. But before that we have another trip to The Everyman to see their production of ‘The Crucible’. Which I’m really looking forward to.