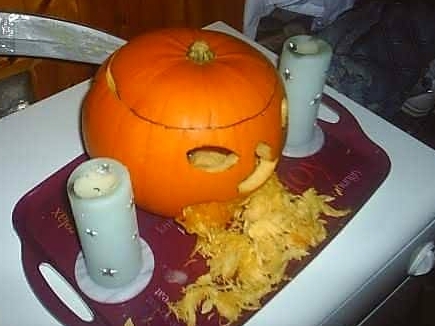 Happy Halloween! Tonight I’m celebrating by doing the Halloween tag while donning some Ghostbusters pyjama bottoms and watching some Halloween themed films with my family (and likely some horror films too). I’m hoping we’ll see some trick or treaters as well.

If you didn’t know by now Halloween is my favourite holiday, seconded by Christmas. When we were little my sister and I went trick or treating around our village with the other children there and a few chaperones. I think that’s where my love of Halloween and fancy dress began; my parents got very into it, carving pumpkins, decorating the house and playing some tricks on us. They still love it now!

As well as Halloween we also dressed up every year for World Book Day, I remember one year I was dressed as Patch from 101 Dalmations.

To get in the Halloween spirit I thought I’d do a Halloween tag this year, which I found on A Blue Sky Blog. So without further ado…

I love the 80s classics. Friday 13th, Nightmare on Elm Street, Texas Chainsaw Massacre, Dawn of the Dead etc, but my favourite from that era has to be the original Hellraiser. Pinhead and the cenobites are some of the best horror movie monsters in my opinion.

I also love Gremlins but as it’s set at Christmas is more of a Christmas film for me. 😉 I also enjoy modern horror too such as Saw, Resident Evil, but you can’t beat the classics.

2) If you were in a horror movie, how far do you think you would get? (Five minutes, halfway, all the way to the end credits…?)

I think I’d be what’s commonly known as the ‘final girl’, the one who eventually bests the killer and survives.

I haven’t played it but love everything I’ve seen about the Friday 13th game (mostly videos on YouTube – like the one below) so far. It’s high of my wishlist!

For games I’ve played, Dying Light is a great zombie game and especially creepy when it switches to night time. When the ‘runners’ come out.

I like the urban legend of a woman who drives into a petrol station and becomes suspicious of the assistant’s attempts to get her to come inside with him. There is another alternative where he attempts to lock her inside the shop.

She ‘escapes’ and drives off before realising he was only trying to warn her about the axe whielding maniac in the back seat!

5) What’s one unusual thing that you’re afraid of?

I suffer from myrmecophobia which means I’m scared of ants! It stems from an ants nest crawling up my legs on holiday when I was younger, I got bit. A lot. Any movie with an ant scene freaks me out, though I’m quite happy to watch Ant-Man, maybe because they’re protrayed as friendly ants?

6) What’s your first memory of Halloween?

As I mentioned above trick or treating around our village with my mum, sister and other chaperones.

As I got older staying in with my dad instead of trick or treating and handing out sweets to the children in the village. We would both dress up and decorate the house.

Ive had so many – witches, a mummy, the grim reaper, a Toy Story alien, Kaylee from Firefly, a pumpkin… The list goes on.

This year I’m working on a Wednesday Addams costume. My family are going to a Halloween party this Friday at a local bar as the Addams Family.

I don’t think I’ve had any bad Halloween costumes. They’ve all been well put together and thought out however, my mum covering me in bandages for a mummy costume when I was younger (I think 8 or 9) wasn’t fun when I needed the bathroom and had to hold it until she could unwrap me! It was also difficult to see. It looked great though.

Werewolves. 🐺 From what I’ve seen and read vampires have some self control but werewolves are often driven by their animal instincts.

Ghosts. 👻 Why? Zombies can be killed.

Clowns. 🤡🎈 Have you seen Pennywise in the new IT adaptation? Very creepy.

Why is Pinhead never on these lists. 😉 I think I’ll go for Freddy as you can (attempt to) run away from the others but he comes at you in your dreams.

I hope you enjoyed reading my answers as much I loved doing the Halloween tag.

Sarah, Estelle, Karin and Merkitty (Laura) to do the Halloween tag – I look forward to reading your answers. 🙂