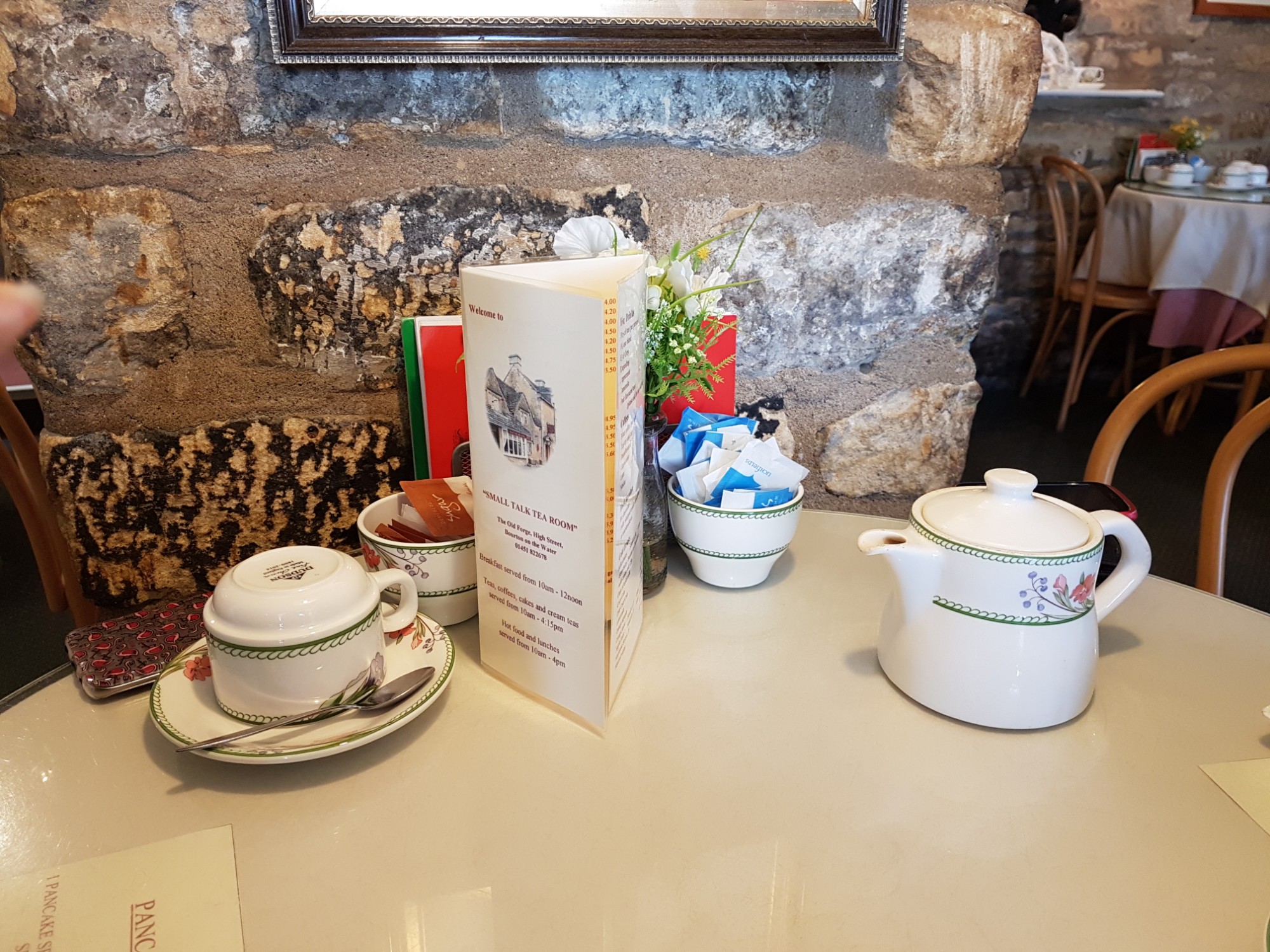 Yesterday was Mothering Sunday in the UK and my dad and I took my mum to the Cotswold village of Bourton-on-the-Water for the day. My sister and her partner met up with us later in the day.

We started with a light breakfast in a lovely little tea room – The Small Talk Tea Rooms – dad and I had pancakes and mum had crumpets.

I’d never been there before but would definitely go back, it was reasonably priced and the staff were friendly. It became apparent that a lot of locals had come for breakfast there too. I think it’s always a good sign if locals like a place.

After breakfast we had a walk around the village sightseeing and reminiscing about all the times we went there when my sister and I were younger. We went to the Model Railway Toy Shop, which is also home to a model railway exhibition. We ran out of time to go today but will be coming back to see it in a few months, I wonder if it’s changed much since I was a child.

We went into a couple of antique shops, looked around a craft market and walked alongside the river. The village is very picturesque.

We had a table booked for lunch at The Duke of Wellington near the Motor Museum and met my sister and her partner there. The pub boasted a large garden with views of the waterfront.

There was a slight hiccup with the table booking – they had us down for 4 people, not 5 but quickly rectified it. I had the paté of the day, which was brussels as my starter, i was lovely and came with two slices of ciabatta which made a nice change to toast.

My main was a reggae reggae chicken smothered in barbeque sauce, it had a nice kick to it, not too spicy. I enjoyed it with a side of garlic ciabbata.

None of us fancied dessert (but we did have ice cream cones from one of the vendors later on), we weren’t stuffed but nicely satiated. Everyone thoroughly enjoyed the meal, the portions were good and mum’s Sunday carvery was very generous! It was all you can eat.

After the meal we popped to the Motor Museum next door to relive our childhood and find Brum.

For those for aren’t familiar with Brum he was the character of a BBC children’s show first broadcast in 1991. The opening and closing sequences of the programme were filmed at the Motor Museum.

The museum is home to a large collection of vintage and classic cars, motorcycles and caravans as well as enamel signs and vintage toys. The museum has changed since I was a child, you used to be able to play with the toys and borrow one of the vintage push and pull toys to take around with you, I understand why they no longer allow it as it does were the toys out. They’re very old as it is.

The museum was well laid out and each exhibit flowed well into the next. I took loads of photos, but these are some of my favourites.

Next we walked down to the other end of the village with the intention of seeing the penguins at Birdland but unfortunately it was closing as we got there! It’s still operating winter opening hours. Our fault for not double checking earlier in the day. Instead we decided to tackle the Dragonfly Made next door.

Here’s a photo to show what I mean.

I was very impressed by the attention to detail in all the models.

We stopped for ice cream on the walk back to the car and promised we’d go back again soon to see the Model Railway and visit Birdland. We had a great trip down memory lane and mum says she had a great Mother’s Day. 🙂