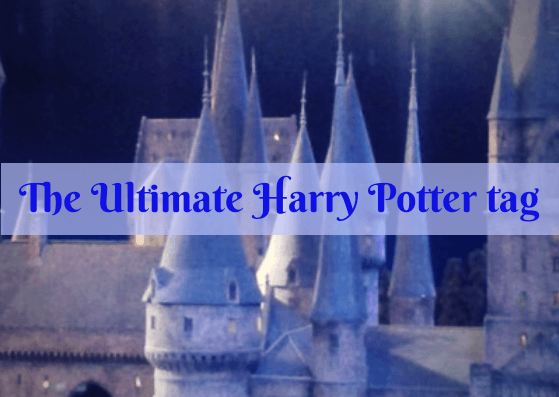 With ITV playing all the Harry Potter movies recently it’s definitely rekindled my love of the franchise, and all things magical. So much so that I hunted down a Harry Potter tag to answer. 😅

The one I found was The Ultimate Harry Potter tag on fellwo Ravenclaw Michelle’s blog A Geek Girls Guide (you can read her answers here). The questions are varied which is great and I discovered a new blog to binge read as well. So its a win-win. 😊

The Prisoner of Azkaban. I felt the books got a little darker after this one, especially with the soul sucking dementors. Also it introduced us to two of my favourite characters: Sirius and Lupin.

The Chamber of Secrets. It bored me and I’ve tried re-reading it a few times and still feel the same way. I found the pacing rather slow which could be the main reason.

Favorite movie?
The Prisoner of Azkaban! I love the storyline and felt the pacing was good. I was worried, as it’s my favourite book in the series, that the movie wouldn’t do it justice but was pleasantly surprised. It has some beautiful imagery, especially in the scenes by the whomping willow and the shrieking shack.

Also the Knight Bus scene is one of my all time favourites!

Goblet of Fire. The pacing was off in this movie, it didn’t flow as well, and my parents (who hadn’t read the books) were somewhat confused after watching it.

Dumbledore: “Happiness can be found even in the darkest times if one only remembers to turn on the light”.

Voldemort, mostly because of how interesting his backstory is.

Professor McGonagall! Or Hagrid… Can I say Hagrid?

A. Wash Snape’s hair, or B. Spend a day listening to Lockhart rant about himself.

If I can use magic, wash Snape’s hair.

Duel A. An elated Bellatrix, or B. An angry Molly

Molly, because I’m pretty sure she wouldn’t actually kill me. I have no intention in harming her family.

Travel to Hogwarts via A. Hogwarts Express or B. Flying car

A. Kiss Voldemort or B. Give Umbridge a bubble bath

Use magic and give Umbridge a bubble bath.

A. Ride a Hippogriff or B. Ride a Firebolt

Is there a character which you felt differently about in the movies VS books?

Snape, I liked him a lot more in the movies and I think that’s largely down to Alan Rickman.

Is there a movie you preferred instead of the book?

The Chamber of Secrets

Your top thing (person or event) which wasn’t included in the movie that annoyed you most?

If you could remake any of the Potter movies, which would it be?

Goblet of Fire, with a different script.

Which house was your first gut feeling you’d be a part of?

Which house were you actually sorted into on Pottermore (or another sorting quiz)?

Which class would be your favourite?

Which spell do you think would be most useful to learn?

Which character do you think at Hogwarts you’d instantly become best friends with?

If you could own one of the three Hallows, which would it be?

Is there any aspect of the books you’d want to change? This can be a character, and event, anything.

I’m not a fan of Cho Chang. There was little the character added to the storyline other than a love interest for Harry, and then Cedric.

If you could bring one character back to life, which would it be?

As above, Lupin or Sirius. But if I brought back Lupin, I’d have to bring back Tonks too.

I hope you enjoyed my nostalgia trip and if you would like to do the Ultimate Harry Potter tag, please do. I’d love to read your answers. 😊