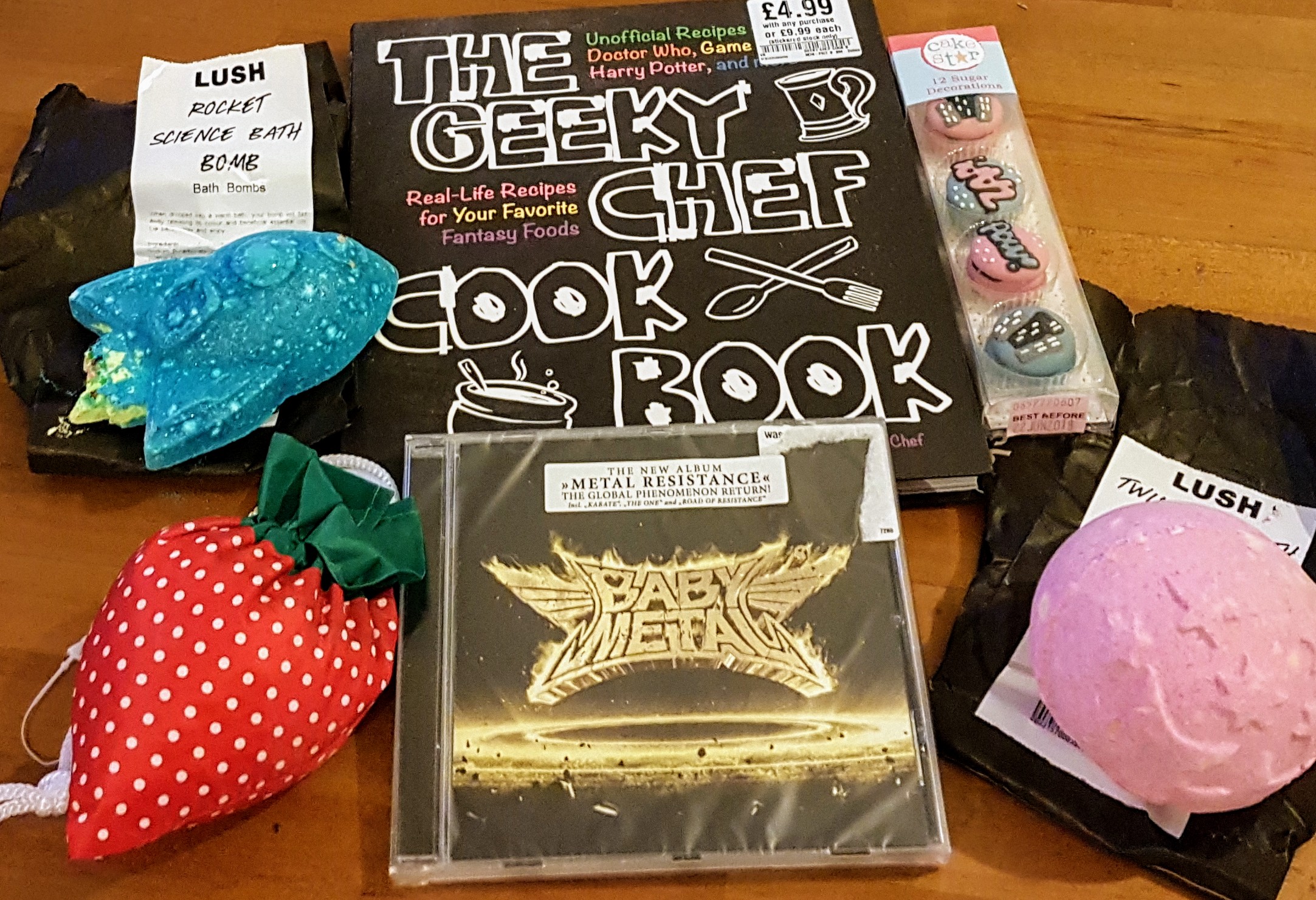 It’s my mum’s birthday in a few weeks so dad and I went present shopping together. It’s becoming a bit of a tradition and I enjoy spending time with him. As Saturday was the only day we both have free between now and her birthday, we decided to go then and chose Cheltenham. I also bought other presents for my family for later on in the year. 🎁🎄

Unfortunately I can’t share what I got them in case they’re reading this 😉 but I can share some of the new bits dad and I treated ourselves to.

Our first stop was breakfast in La Scala where I had a croissant, dad had a giant traditional pasty and we both indulged in a piece of shortbread each. It was great, especially the shortbread which was delicious.

With our bellies filled we headed to TK Maxx and picked up a couple of DC cuddly toys for more than half the retail price! Bargain! Dad may go back and buy some more at a later date.

Next up was HMV which sells music and accessories such as speakers, games and consoles and films (both blu ray and dvd). This particular branch has an extensive sci-fi and horror section. We came out with a few dvds, couple of CDs and a couple of books.

The CDs were by the Japanese metal band ‘Baby Metal’ who dad had recently started listening to and watching on YouTube. Their live shows are very unique but I’ve not heard enough of their music yet to make my mind up about them. Dad loves them though and hoped to see them live.

The book I got was on sale for £4.99 with any other purchase and retails at £12.99, you can always count on HMV for impulse bargains at the tills. It’s called ‘The Geeky Chef Cook Book’ and has a wide range of food and drink recipes including Mudder’s Milk from Firefly and Gach from Star Trek.

We stopped in The Works which is a discount book shop and arts and crafts shop to look for jigsaw puzzles, which is my mum’s main hobby before heading into Lush to see what new products were in. They didn’t disappoint. 🙂

I bought another Twilight bath bomb as I’d run out 🙁 and one shaped like a rocket ship (called Rocket Science) which I’m told only arrived in store Friday! 😀 I haven’t tried it out yet but am looking forward too. It’s blue and yellow with glitter, sequin stars and is scented with bergamot and lemon.

Speaking of Twilight, which is my favourite Lush bath bomb by the way, it’s now available in a spray which you can either spritz on yourself as a perfume or use as a room or pillow spray. The young lady in Lush spritzed some on my arm and it smells amazing (and lasted all day), I’ll definitely be picking up a bottle when my current room spray (a lavender one by Avon) runs out.

We headed up the highstreet to Primark just as it started drizzling and by the time we had finished looking around and got outside it was hammering down. 🌧 We’ve had some strange weather recently! It’s been warm and humid, even in the rain, or hot and sunny… we’re more used to cold and rainy.

We sheltered in Primark’s doorway for a bit with many others while the rain died down then made a quick dash to Lakeland. My favourite cookshop. I bought some superhero-esque cupcake toppers and a strawberry bag as mine had split (I’ve talked about it before in my ‘What’s in my bag’ post). I’ve never gone in there and not come out with something! Lol.

Our last stop was bookstore Waterstones to see if they had any hardback copies of Lord of the Rings and to see if the latest House of Night book was in stock. Nope, on both accounts.

I’ve been looking for a new set of the Lord of the Rings trilogy after mine suffered water damage, long story short they were in my car when we were moving flats and my bottle of screen wash leaked on them. 🙁 I haven’t found a set I love to replace them with yet.

It started hammering it down again as we reached the car park and didn’t stop the rest of the day. Nevertheless we had a good morning and it was nice to catch up with him.