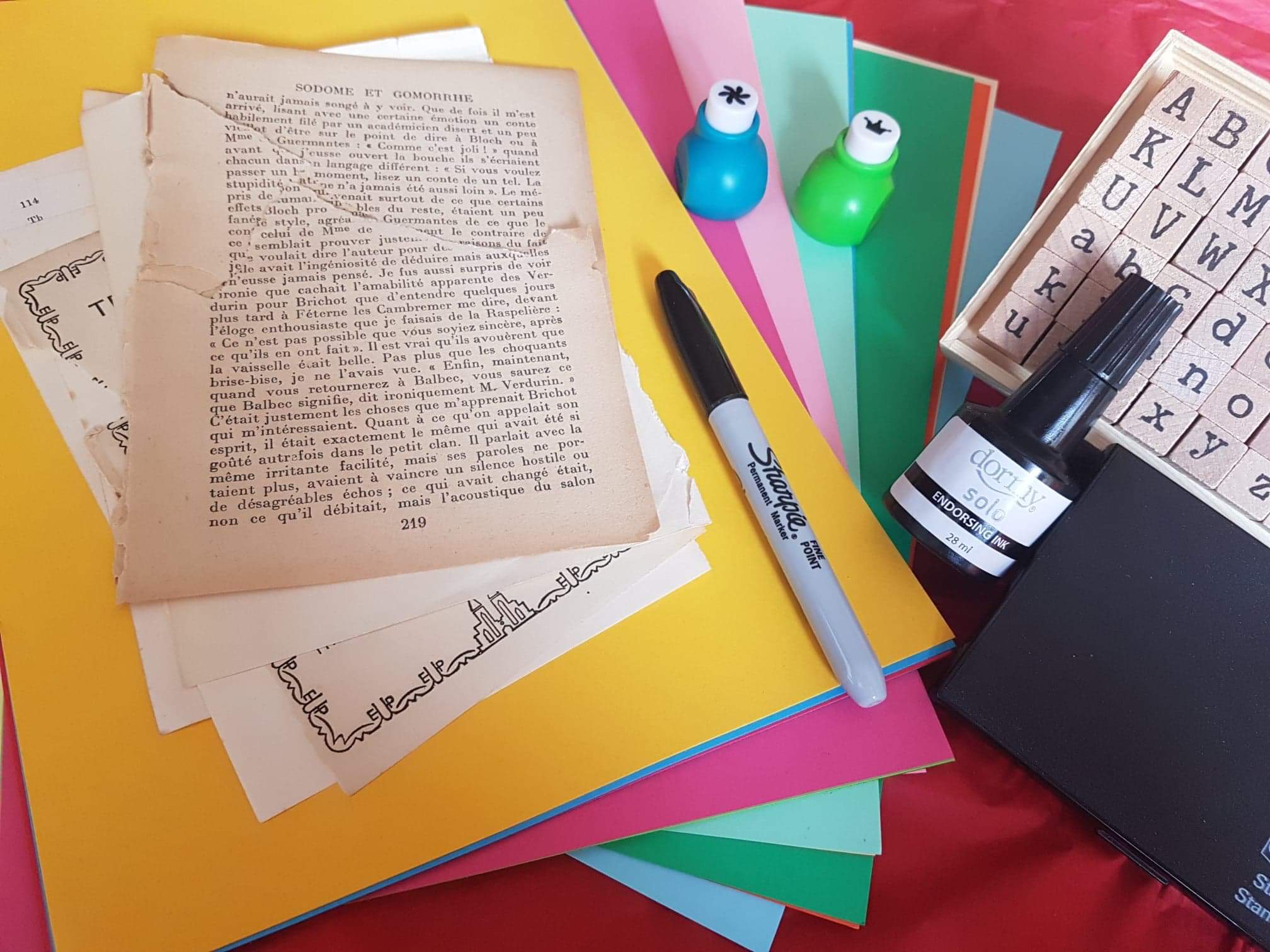 AD, GIFTED | The 5th March is World Book Day and this year I’m celebrating it with the help of Viking*, one of the largest stationery suppliers in the world. Who’ve kindly sent me a box full of stationery goodies to create some book-ish crafts with.

Their challenge? To celebrate your favourite books, stories and characters, using the pages from old books. The idea is to give the books a new lease of life, rather than have them collecting dust on a bookshelf somewhere. Although I wouldn’t recommend doing this with your favourite, well-loved, books!

The box included a ‘Book Art’ craft book, multicoloured paper, red tissue paper, sharpie pens, two paper punches, an A4 gold frame, old book paper – in case I didn’t want to cut up my own books – and an alphabet stamp kit complete with stamping ink and an ink pad. Which was probably my favourite item! My dad has already claimed the paper punches for himself, saying they’ll be great for his fantasy and military modelling projects.

I hadn’t originally planned to include a children’s book character, until I saw Vikings own lion design on their blog. * Which inspired me to make a paper version of The Very Hungry Caterpillar. 🐛

Cut out the pieces and start assembling your Very Hungry Caterpillar, layering each section to make the body.

Assemble the tail section on to the body.

Add the feet using The Very Hungry Caterpillar book as a guide.

For this design I knew I wanted to use the Mockingjay symbol which is a constant symbol of hope throughout the series. Along with an inspirational quote from the books.

Draw the Mockingjay symbol on to coloured card – I used yellow, as that’s what I had to hand, but gold would also work well for this.

If you’re struggling to draw this free hand this is a great tutorial (which I used).

Mount the book pages onto a plain piece of card or paper.

Add your favourite quote from the series to the book pages with the lettering stamps.I chose,

Hope is the only thing stronger than fear.

Cut out the Mockingjay symbol and stick it on top of the book pages.

The Lord of the Rings

I enjoy oragami (the Japanese art of paper folding) but it’s been some time since I’ve made something creative out of paper.Both The Lord of the Rings and The Hobbit book series are full of interesting characters and creatures, so I thought it would be the perfect opportunity to try my hand at oragami again.I decided to craft the watchful eye of Sauron, using this blinking eye tutorial.

What you will need

Draw and colour the eye of Sauron using the white paper.

Half way through the tutorial you will need to glue the eye of Sauron to the black paper.

Continue the tutorial until the blinking eye is complete.

The idea of the blinking eye is that the back corners can be pinched to open and close the eye. 😐😑 If you’ve followed the tutorial correctly, you should end up with something like this…

And there you have it – my three book crafts. 😊 I thoroughly enjoyed making these and would like to thank Viking again for the box of stationery goodies.

What are some of your favourite books? Is there a favourite character or scene you could turn into a book-ish craft? Let me know in the comments. 📖