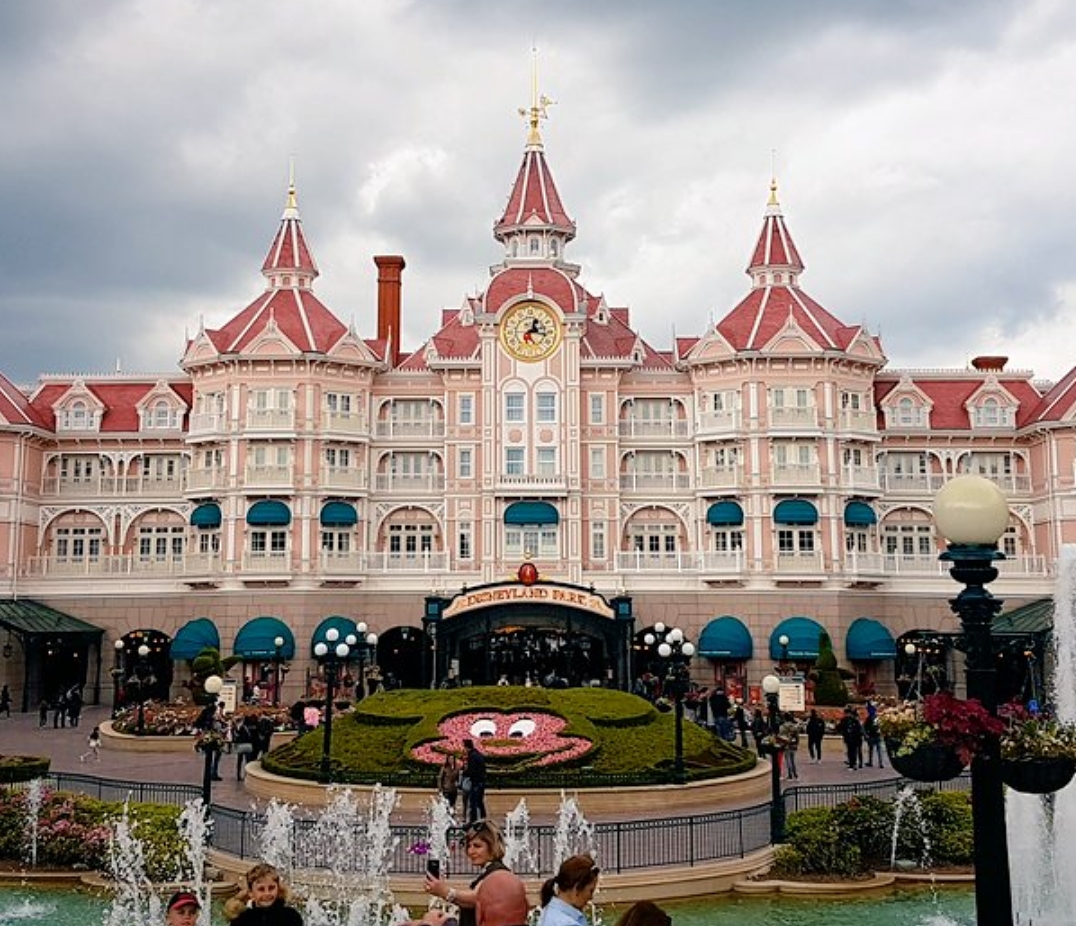 If you’ve been following me on Twitter or Instagram recently you’ll know that I spent my sister’s hen weekend in Disneyland Paris at the begining of May! 💗🎢🎡 It was a fun packed few days, and I’m happy to report that I checked everything off my Disneyland Paris Bucket List (see ✔ marks); except for Halloween, obviously. We’ve all been having serious post Disney blues since getting back home though… 🙁

Disneyland Paris via the Eurostar

In my Disneyland Paris tag post I mentioned that we would be travelling by the Eurostar and staying at one of the Disneyland hotels – Hotel Santa Fe. Which were two things I’d never done before, so I wasn’t quite sure what to expect.

The Eurostar trip was fairly smooth and the staff at check in were very friendly, letting us board first and snapping a few photos of us at the gate. It took roughly 3 hours and seemed to fly by on the way there; but not so much on the way back. I’m not sure if that’s because we didn’t really want to leave or the lack of Wi-Fi. 😉

Tip: In economy carriages, not all of them will have plug sockets or Wi-Fi, so remember to pack a power bank for the long journey. Or a book to read.

If you’re travelling by the Eurostar and staying at one of the Disney hotels, I’d highly recommend their luggage service. They took our cases from the train station to the luggage area at the hotel for us, so we could concentrate on character meets and rides.

Seconds after entering the park we met Minnie Mouse, which seemed fitting as she’s one of my sister’s favourite characters. We had a few bride squad photos with Minnie and my sister had some lovely single ones too.

A few members of “team bride” had kindly prepared t-shirts, wristbands and Mickey ears for us to wear during our weekend. Which I thought was a great touch and lovely momento from our weekend together.

We continued our character meets with Jessie (Toy Story) before heading to Discoveryland to meet the Dark Lord of the Sith, which Sarah and I were particulary excited about. 😍

Discoveryland was one of my favourite “lands” in the park (for obvious reasons); from the X-Wing on top of the building (shown above) to the Star Wars themed shop next door, and the whole steampunk feel to the architecture.

Darth Vader was in the building underneath the X-Wing; which seemed fitting as he interrogated us about the rebel forces throughout the meet and greet. He was perfect. We were all in fits of giggles, or was that nervous laughter, as he questioned us. Definitely one of the highlights for me.

After meeting Lord Vader we popped into the Star Wars shop and I grabbed another magnet for my growing collection. But there was so much Star Wars merchandise I could have come home with! From pyjamas to design your own lightsabers.

Feeling exhausted from our journey, we hopped on the Mad Hatters Tea Cups for a spin, and more importantly, a sit down(!), before meeting the main man himself; Mickey Mouse.

As expected the queue to meet was very long but we were kept entertained with Mickey Mouse cartoons on the big screen. We had a great mix of French and English, and there were a few I recognised from my days of watching the Disney channel.

Mickey was hilarious and locked up Lotso the bear (from Toy Story), who we had with us, for how he behaved in that movie. 😅 Before posing for some photos and signing a few autographs.

We finished our day by watching the day time parade before grabbing an early dinner at Planet Hollywood.✔ Which was just as I remembered – full of movie memorabilia.

The restaurant itself was decorated with an array of movie props including a Jaws shark hanging from the ceiling! There were also some props I recognised from my visit in ’97 like the Jumanji prop board game in the gift shop and “Die Dan” crochet squares from Ace Ventura.

Tip: Try to check in earlier in the day, if you can, as the evening check in gets very busy, with limited staff available.

Saturday – A rather blustery day

Saturday morning greeted us with torrential rain!! Which wasn’t ideal when we’d planned this to be our main day in the Disney parks. 😑

The forecast lied (doesn’t it always?) by predicting sun and I was so thankful for the rainmac I’d packed with me. Although I wish I’d packed my waterproof gloves as well, as my hands were freezing! Also Converse + rain = cold, wet feet. It took 2 days for my shoes to dry completely.

Tip: Pack a small umbrella and definitely a rain mac or poncho! Even if the forecast says “sunny”.

It was a hard day but we tried not to let the weather put a damper (pun intended) on things. But when you’re wet, cold, tired and hungry… emotions can run high!

However getting to meet our favourite characters, be fuelled with adrenaline on the rides and be able to celebrate with sister, more than made up for it.

Let’s move on before I get too soppy, shall we?

One of the perks of staying at the Disney hotels is being able to get into the parks an hour before opening. Which is great for beating the queues!

Of course we took advantage of this and headed to Crush’s Coaster ✔ in Walt Disney Studios for our first ride of the day.

Crushes Coaster is a fun, spin-y rollercoaster ride through the EAC (East Austrlian Current). It was one of my favourites to ride and, if you can, ride it backwards! You’ll thank me (if you love rollercoaster that is).

Via Make a Gif

Our next ride was Rock N’ Rollercoaster avec Aerosmith which is due to close in September for a Marvel revamp. It’s one of my favourite rides in the park, full of corkscrews and rock music, what’s not to love? Although a couple of the bride squad will disagree with me on that one, lol.

We quickly followed this by a ride on the Tower of Terror. A vertical drop ride which gives you great views of the park… if you’re brave enough to open your eyes at the top!

We took a break from rides and headed into the main Disneyland park to (hopefully) meet Winnie the Pooh; Jenna’s favourite character.

Side note: Anyone not refered to as ‘mum’ or ‘sister’ are part if the bridal party. 😊

We made a deal early on that we all could meet our favourite character first out of the group. It was lovely to see the excitement on everyone’s faces as they met their characters.

Pooh was adorable! We got some cute photos with him, and Jenna was on cloud nine for the rest of the day.

After a busy morning we headed to the Hakuna Matatta restaurant for food, which seems to be a running theme in our family. As I’ve been there on every Disneyland Paris trip so far!

In between our lunch break we went in small groups to meet Baloo, and I got a giant bear hug; he was very cuddly.

Our next character meet was Goofy in Frontierland who is one of my mum’s favourite Disney characters; the other being Tigger.

He was very entertaining and dragged my mum off by the hand before posing for photos and signing a few autographs. We joked about Goofy being “mummy’s new boyfriend” the rest of the weekend. 😉

As the weather had brightened up somewhat, and we all needed a sit down, we took a relaxing boat ride through Storybook. The weather of course started to get dreary again as we were exiting the ride! 😣

As we visited the parks during their Superhero month, Walt Disney Studios was full of Marvel themed treats, activities, and characters. Including Captain America.

Captain America really was the all American hero, very animated, and he asked each of us in turn who are favourite superhero character was. Joking that he hadn’t heard of Batman or Wonderwoman. 😅

I was feeling hungry so picked up a pot of falafel balls (one of the only dairy free snacks available!) while we waited for Spiderman. They were delicious and presented in a Marvel themed tub.

There were a few Marvel themed shows and activities throughout the day, but the one I was most excited for was The Guardians of the Galaxy dance off.

The dance off included some audience participation, and Jenna was even dragged up on stage to be part of the dance off! We cheered her on as she danced alongside Starlord, Groot and Gamora.

Side note: There is a video. But I’m not sharing it here… sorry.

We were all rather peckish after a long day of rides and character meets so decided to head to Disney Village for some dinner.

We ate at the Earl’s sandwich shop, and were so glad we did! This place does the best sandwiches! End of.In fact we loved it so much that we went there every night after that, and brought some for the train ride home too.

We finished our day by watching the illumination ceremony in the main Disneyland Park. It was perfect, although I wish I’d gotten more photos!

Spoiler alert: I more than made up for it on Sunday night. 😉

Look out for part 2 of our trip coming very soon, including lunch with the Disney Princesses and a character breakfast with Mickey and Friends!

Have you ever been to Disneyland Paris? What are some of your favourite things to do? Let me know in the comments.