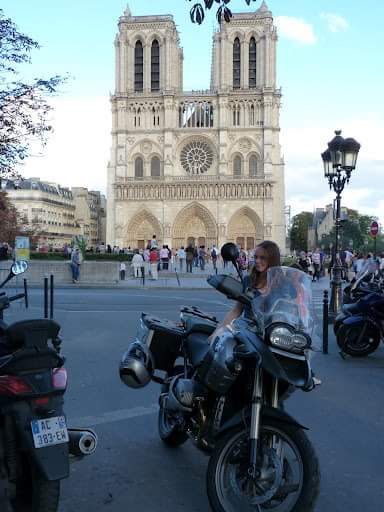 Travelling to Paris by Motorbike

This past weekend my boyfriend and I made a last-minute decision to go on a road trip to Paris! And since it was a bank holiday weekend we both had three days to play with. Instead of using my car, we decided travelling to Paris by motorbike would be a great new adventure for us.

We started our trip early Friday morning with a 3-hour journey to The Channel Tunnel at Folkestone. Of course, we stopped on the way for snacks and restroom breaks. But I quickly found out that travelling by motorbike is a lot harder than by car. You need to be fully alert at all times – even as a passenger. And it’s very difficult to let your ‘driver’ know when you need a break! I was thankful for the rest on the train.

Once we arrived at the customs border in Folkestone, we faced our first hurdle – locating our passports. We’d both placed them in our inner jacket pockets which were a little difficult to reach. And we were also required to remove our helmets – which I completely understand – but it meant I needed to dismount the motorbike so Artur could reach his and remove his helmet.

The journey from Calais to Paris was a little easier as we made up a couple of non-verbal instructions we could give each other. If either one of us was feeling fatigued, we’d tap once, or if we needed the restroom, we’d tap twice. It worked well for us and I just wish we’d thought of it from the start!

Travelling to Paris by Motorbike – What to pack?

As we were travelling by motorbike we both had to pack very lightly. We both packed 2 t-shirts, 2 pairs of underwear, 2 pairs of socks and I packed jeans. Artur remained in his motorbike trousers throughout the weekend. We also had base layers that we were already wearing which were used as pyjamas.

To save on costs we decided to camp and happened to find a campsite in the middle of Paris. It had an on site shop (where I tucked into a pain au chocolat) and a restaurant. It looked like the campsite was more tailored to RVs and tourers, but we found a nice spot in their electric-less pitches.

As we only had two days to explore Paris  (Friday and Monday were travel days) we decided to visit the more popular tourist attractions. We climbed the steps of the Eiffel Tower, road the motorbike around the roundabout near the Arc  de Triomphe (and stopped for photos nearby), took photos outside of Notre Dame and walked along the river. We also visited ‘Le Louvre’, one of Paris’ most famous art galleries.

One night at Disneyland Paris

Disneyland Paris is roughly 45 minutes from the city centre and I couldn’t pass up the opportunity to go back there. I’d only visited as a child and there were rides I was too short for that I was looking forward to trying. Thankfully, I managed to convince Artur to drive us there Sunday evening. It was cold!! But I’m really glad we went through with it. We arrived a little after 10 pm so there were fewer crowds and we were able to go on some of the thrill-seeking rides with no queues. My favourite ride was Space Moutain 2. We also watched the closing lights display at the castle.

We really enjoyed our spontaneous, short trip to Paris. 🙂

Have you ever been to Paris? Or travelled somewhere by motorbike? Let me know in the comments.