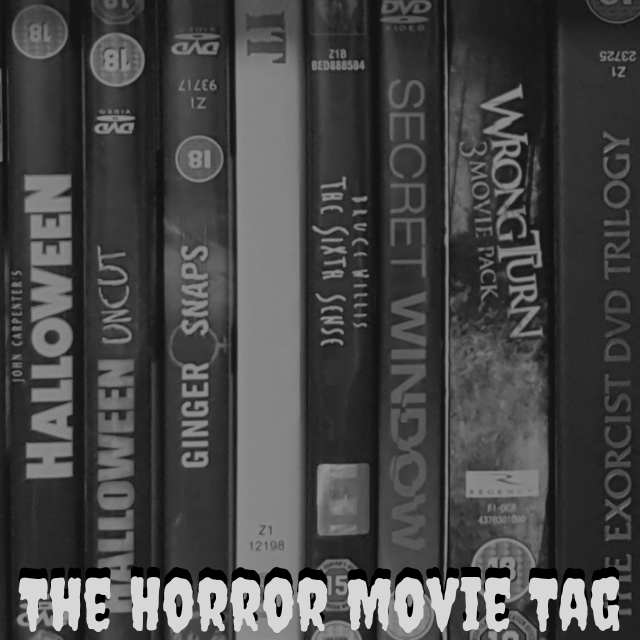 I love a good horror movie! It’s my favourite movie genre and has been since I saw Gremlins in the early 90s; not that I found it that horrific. Gizmo is cute and the other Gremlins had me laughing out loud. Please tell me I’m not the only one?

Since then my love of horror has grown and I have a growing collection of DVDs and some Blu Rays.

The gem of my collection is my Hellraiser trilogy box set signed by Pinhead actor Doug Bradley. I met him at Collectormaina London along with Robert Englund (Freddy Krueger) in 2011. Both are horror movie legends and very down to earth gentlemen. Robert was kind enough to talk in the Freddy voice, this was after my mum told him the voice “freaks her out”. 😅

With the new Halloween sequel being released this week and to celebrate my love of the genre, I wanted to finish this post with the Horror Movie tag. Which I found over on The Monkey Is In.

1. What is the first horror movie you remember watching?

As mentioned at the beginning of this post, the first horror movie I watched was the creature feature: Gremlins. Which remains one of my favourite horror movies.

2. What is your favourite horror movie?

This is a tough one since I love so many. Besides Gremlins, I love Hellraiser – the original storyline was unique and the cenobites are classic, creepy horror movie monsters. Pinhead has some great one liners and Doug Bradley plays him superbly.

3. What is your favourite horror movie genre?

Based on my previous answers, you may think my favourite horror movie genres are creature features or monster movies, but it’s actually vampire movies.

From John Carpenter’s Vampyres to Underworld and everything in between. I love the mythology behind them and how every movie seems to have a different take on it. Some vampires turn to dust after you stake them (I’m looking at you Buffy the Vampire Slayer) and some need to be staked with silver, rather than wood. There are also some interesting storylines involving lycans (werewolves) and the hunter Van Helsing.

4. What genre scares you the most?

I presume this means sub-genre and I can honestly say only one movie scared me and this was when I was a child. The movie was Sphere which is more of a Sci-fi Horror / Thriller. I’ve watched it countless times since and can’t pinpoint what scared me about it, as it doesn’t now.

I think it was the fear of the unknown that scared me with this movie. Psychological horrors.

5. What is the last horror movie you watched that actually scared you?

As above – Sphere as a child.

6. Who is your ultimate scream queen?

I have to go with either Jamie Leigh Curtis (in Halloween) or Neve Campbell (in the Scream franchise).

7. What’s a concept that you’d like to see in horror?

Originality. I’d like Hollywood to stop remaking every horror movie out there and mix it up with some new ideas. Black Mirror and American Horror Story on Netflix, although tv shows have originality. This is something I’d like to see in horror movies.

8. What is your favourite on screen kill?

There’s something unforgettable about Johnny Depp being sucked through his mattress and blood spewing out of the hole.

Either Hellraiser or Nightmare on Elm Street.

Sarah, Merkitty (Laura), Lianne, Helen, Jordanne, Graham and Britt. But of course everyone is welcome! Please let me know if you do this one so I can read your answers.

To quote Ghostface from Scream…